Highlights of the combination:

-- More nonstop destinations served from the than any airline

-- A global network of partner airlines that, together with , fly to more than 800 destinations worldwide

-- New daily flights to ; ; and from its hub starting summer 2017 – service will be available for sale .

-- A fuel efficient fleet of 286 aircraft with an average age of 8.1 years, the youngest of the top five U.S. airlines

, /PRNewswire/ -- (NYSE: ALK) today announced it has closed its acquisition of (NASDAQ: VA). The definitive merger agreement, which was signed in April and approved by shareholders in July, brings together two of the country's favorite airlines into a unified force that will provide an attractive alternative to the "Big 4" airlines that currently control 84 percent of the domestic market. and will spend the next year working to secure () certification to allow the two airlines to operate as a single carrier (with regional sister carrier remaining on its own separate operating certificate). 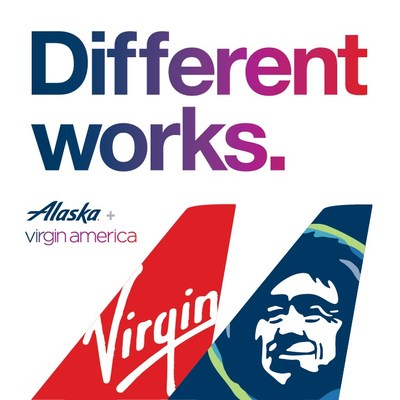 " and are different airlines, but we believe different works – and we're confident fliers will agree," said , CEO of . "Together, we'll offer more flights, with low fares, more rewards and more for customers to love, as we continue to offer a distinctive travel experience. The two airlines may look different, but our core customer and employee focus is very much the same."

Today, boasts nearly 1,200 daily flights to 118 destinations, the most seats on flights from the and more than annual revenues. will continue to provide customers the low fares, unmatched reliability and award-winning service they've come to enjoy, while offering a convenient schedule of flights to even more of the places they want to fly. customers will have access to a route network that offers six times more daily flights than before.

"This partnership is positive for air travel consumers and demonstrates an investment in our state," said , Lieutenant Governor of . "Both airlines boast a strong history, and we look forward to seeing their innovative spirit magnified with their global international network of partner airlines."

In addition, the combination opens up growth opportunities in important business markets by increasing access to high-demand airports like and the three primary -area airports: , and Newark Liberty International Airport.

The company also announced new flights from its hub to (daily), Minneapolis (twice daily) and , California (four times daily) beginning in the summer of 2017. Schedule and availability will be announced .

has long been an industry leader in both customer satisfaction and performance. Customers can expect operational and customer service excellence to continue throughout the integration with . has ranked "Highest in Customer Satisfaction Among Traditional Carriers in , Nine Years in a Row" in the 2016 North America Airline Satisfaction Study, the No. 1 spot in the annual Middle Seat Scorecard for the past three years, and has been named the No. 1 on-time major North American carrier by FlightStats for six years in a row.

To celebrate the airlines' combined nearly 1,200 daily flights, the company will give away 1,200 round-trip flights starting today. Customers may enter the contest at
twogether.differentworks.com.

For customers with future travel already booked on or , business continues as usual. Learn more about what the merger means for customers at differentworks.com.

Additionally, starting Dec.19, customers will be able to purchase tickets at alaskaair.com. Tickets will continue to be available for sale at virginamerica.com for the immediate future.

Beginning , Virgin America Elevate members will be invited by to activate new Mileage Plan accounts. This will allow them to also earn Mileage Plan miles when flying with and any of to over 800 destinations worldwide. Alaska account for 44 percent of all international airline seats flown to and from the U.S. – more than any of the big three airline alliances – and offer more than three times the worldwide destinations that frequent fliers currently have access to.

"Beginning Monday, Virgin America Elevate members and Alaska Airlines Mileage Plan members will enjoy reciprocal rewards earning across each other's networks," said Tilden. "We plan to make this the most customer-friendly merger ever, and we will have much more to announce over the coming weeks."

The future of the brand

No decisions regarding the Virgin America brand have been made. plans to continue to operate the fleet with its current name and product for a period of time while it conducts extensive customer research to understand what fliers value the most. will continue to fly under its brand with no immediate changes to the onboard product or experience.

"Culture has been a real challenge in many mergers, so we're working to do things differently," said , president and COO who will also become CEO of today. "We are being very thoughtful about culture and are working to create an environment that reflects who we are and where we've been, that also enables us to work together, be bold, and succeed in a rapidly evolving industry."

Learn more about approach to merging two cultures at blog.alaskaair.com.

To celebrate the merger of two beloved airlines, leaders will join employees from , and later this morning at for the unveiling of a co-branded 737 featuring a special, one-time livery painted in shimmering red, purple and blue. The aircraft features the slogan "More to love" and will fly throughout route network starting today, in celebration of the increased customer benefits of the combination.

The combined company will be led by CEO Tilden. will serve as chief executive officer of in addition to his role as chief operating officer and president of . , previously senior vice president and chief financial officer, will serve as president of the subsidiary, reporting to Minicucci. Hunt will be based in the company's regional headquarters. Both Minicucci and Hunt's positions are effective today, and remain in effect until the airlines obtain a single operating certificate from the , expected in early 2018.

*Some overlap exists between the two airlines

Additional details about the transaction, including multimedia assets, are available at differentworks.com and alaskaair.com/newsroom and include:

Additional assets will be posted at alaskaair.com/newsroom by and includes high-resolution, broadcast quality b-roll footage and images of today's media event.

, together with its regional partners, flies 32 million customers a year to more than 110 cities with an average of 970 daily flights throughout , , , and soon . With global airline partners, customers can earn and redeem miles to more than 800 destinations worldwide. Onboard, customers are invited to make the most of their flight with amenities like power outlets at every seat, streaming entertainment direct to their device, Wi-Fi and an inspired food and beverage selection featured on most flights. ranked "Highest in Customer Satisfaction Among Traditional Carriers in " in the J.D. Power North American Airline Satisfaction Study for nine consecutive years from 2008 to 2016. Alaska Airlines Mileage Plan also ranked "Highest in Customer Satisfaction with Airline Loyalty Rewards Programs" in the J.D. Power Airline Loyalty/Rewards Program Satisfaction Report for the last three consecutive years. is a subsidiary of (NYSE: ALK). Learn more on the airline's newsroom, blog, alaskaair.com, @AlaskaAir, facebook.com/alaskaairlines and linkedin.com/company/alaska-airlines.

Known for its mood-lit cabins, three beautifully designed classes of service and innovative fleetwide amenities — like touch-screen personal entertainment, WiFi and power outlets at every seat, has built a loyal following of flyers and earned a host of awards since launching in 2007 — including being named the "" in Condé Nast Traveler's Readers' Choice Awards and "" in Travel + Leisure's World's Best Awards for the past nine consecutive years. For more: www.virginamerica.com

This communication contains forward-looking information about and the merger with . Forward-looking statements are statements that are not historical facts. These statements can be identified by the use of forward-looking terminology such as "believe," "expect," "may," "likely," "should," "project," "could," "plan," "goal," "potential," "pro forma," "seek," "estimate," "intend" or "anticipate" or the negative thereof, and may include discussions of strategy, financial projections, guidance and estimates (including their underlying assumptions), statements regarding plans, objectives, expectations or consequences of the merger and statements about the future performance, operations, products and services of and/or . cautions readers not to place undue reliance on these statements. These forward-looking statements are subject to a variety of risks and uncertainties. Consequently, actual results and experience may differ materially from those contained in any forward-looking statements. Such risks and uncertainties include: risks inherent in the achievement of anticipated synergies and the timing thereof; risks related to the disruption of the merger to and its management; the effect of the merger on ability to retain and hire key personnel and maintain relationships with suppliers and other third parties; labor costs and relations, general economic conditions, increases in operating costs including fuel, inability to meet cost reduction goals, an aircraft accident, and changes in laws and regulations. These risks and others are described in greater detail in filings, including its Annual Report on Form 10-K for the fiscal year ended , as well as in other documents filed by with the after the date thereof. makes no commitment to revise or update any forward-looking statements in order to reflect events or circumstances occurring or existing after the date any forward-looking statement is made.

* received the highest numerical score in the 2014-2016 Airline Loyalty Rewards Program Satisfaction Report. 2016 Report based on 3,073 total responses evaluating 7 programs, and measures the experience and perceptions of members who were surveyed . Your experiences may vary. Visit jdpower.com 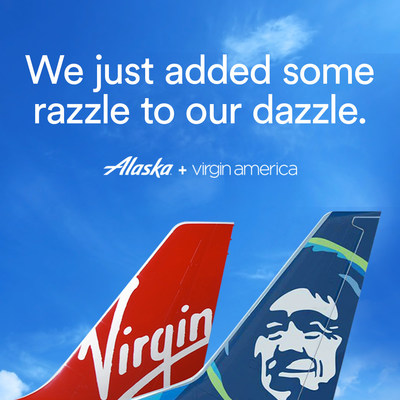 To view the original version on PR Newswire, visit:http://www.prnewswire.com/news-releases/alaska-air-group-closes-acquisition-of-virgin-america-becomes-the-5th-largest-us-airline-300378009.html